For Christmas, we got a $8.00 card game called Ratuki.
It's a fast paced, fun game for 2-5 players.
It has simple rules and we had a ton of fun playing together. The chaos is like a combination of slap jack and spoons!!! 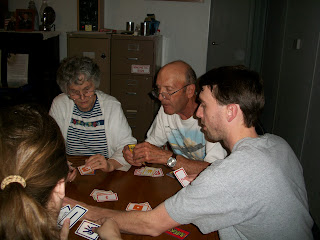 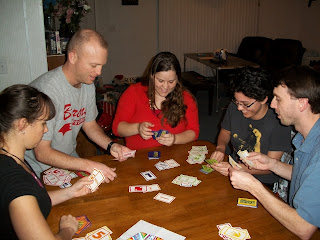 The toughest part was keeping my Soldier in his chair so he didn't cream us.

My brother-in-law and his wife liked it so much, that they bought Ratuki so they can play it when they get back home.
Since we had lots of family around, we got rid of the chairs and used our 2 decks (I drew a line across all my cards for easier sorting after each round). We ended up placing 5 stickers down the center of the table for the piles to be more organized (10 piles were impossible to manage).  Each round we'd all move one space to our left to make it a little more fair to the people who got stuck on the end of the table or were the lucky ones in the center.  We ended the game by having the lowest two scoring players for each round get eliminated until the final champion, my brother-in-law with his new deck of cards, won this AWESOME GAME!

I'd stick to just 5 players... well, may six, or just decide on a limited number of piles on the table and use two decks. Make it a party!

Go get the game, invite over some friends, have them bring the snacks, and let the fun begin! :)
Posted by A Simple Dimple at 9:52 AM

Email ThisBlogThis!Share to TwitterShare to FacebookShare to Pinterest
Labels: us

What ya lookin' for?